Recycling is a concept we still don't understand completely. Persuasive speeches on recycling will not only help us to know what recycling exactly is, but also its importance and benefits. To know more on the same, read on...

Recycling is a concept we still don’t understand completely. Persuasive speeches on recycling will not only help us to know what recycling exactly is, but also its importance and benefits. To know more on the same, read on…

In school, we are taught about recycling, maybe just because it’s a chapter in our textbooks. As we grow up, we understand the impact of words such as ‘global warming’ and begin to also understand that these words are more important than we ever thought. Recycling isn’t just making something new out of something that has been already used. There is a lot more to the term than just that. If you’re going to prepare a persuasive speech on the concept of recycling, it’s very important for you to know that you have to be convinced about the ideologies involved, before you convince others about the same. It is very important to understand the concept of recycling before we proceed to preparing any kind of persuasive speeches on recycling.

Pollution revolves around one type of waste or the other. This waste has to be taken care of at two stages – before it gets created and after it has been created. There is a concept called Waste Disposal Hierarchy, which consists of three R’s, namely, Reduce, Reuse and Recycle. Recycling is the last option we have at reducing waste. It is when we make new materials (which have utility) from the wasted ones, but using the appropriate process. This also reduces the pollution arising out of landfilling and incineration. Recycling involves two categories, one in which the used products are recycled to make the same product again, and second, wherein the waste is used to produce something different. Recycling is not only a concept now, but also a big industry. Make sure you emphasize on both, the positive and negative effects of recycling.

Preparing For Your Persuasive Speech on Recycling

A speech is nothing more than an essay put forward verbally. It is very important that you prepare an essay first and then convert it into a speech. A speech has the backing of a voice. So if your essay turns out great, your speech will turn out to be greater. Here are a few points that will guide you to write down a wonderful speech, one that will surely be amongst the best persuasive speeches on recycling.

If you look at any examples of persuasive speeches, you will see they all begin with an introduction. At the beginning of the speech, you need to mention why you selected this topic and how it has helped you to learn more. Also mention how you’ve come to know things you weren’t aware of earlier. Introduce your audience to the concept of recycling before you start with your speech. They should know the topic they’re going to hear about in the next few minutes. Introducing the concept also involves stating of some recycling facts that go along with it. These facts can also point out the severity of the issue at hand in the form of statistics and other analytical data. Once you have educated your audience about the basics, you can move ahead to the next part of the speech.

In this category, you can mention the importance of the topic in detail, with a lot of facts and cited data supporting your say. One of the most important parts of persuasive essays or speeches is to convince and persuade the people about what you mean to say. This goal cannot be achieved unless you prove it to them that what you’re saying is nothing but the truth. Visit authentic websites and read some good books, and search some interesting facts about recycling, to surprise and entertain your audience. You also need to mention how our blue planet is facing a constant threat due to pollution, and how the intensity of this threat is only going to increase with time. In this part of your speech, you have to speak about everything you searched for, right from the current scenario due to waste not recycled properly, to forecasts made about the future, where the effects of bulk and improper recycling would do nothing but haunt us all.

Now that your audience is well aware of what exactly recycling is, you can tell them what they need to do on an individual basis to avoid the creation of waste in the first place. Recycling is surely a great way to reduce pollution, but people need to know that it is a cure and not a prevention. Find out ways in which people can recycle at home and help lessen waste creation on an individual level. Also find out what people can do to avoid creating waste and contributing to pollution in one way or the other. The sole purpose of this speech should be convince and persuade people to do something that will help the cause and contribute to the society. Think of at least 25 ways in which people can avoid waste creation and can recycle at home, so that they are free to choose a way they think they can implement.

While preparing for any of the persuasive speeches on recycling, you have end your speech by telling everyone how making the changes you suggested is going to help them and the entire environment too. You have to assure people that this is the right way to think and act. Now that you have persuaded them to think in a particular direction, you need to tell everyone it is correct to do so and why. Also mention a few examples where practices to reduce waste creation were implemented and how they benefited everyone involved. If the time is not a concern, you can give such examples after every suggestion you make and every opinion you put forward.

It is very crucial for you to understand the importance of recycling and the concept itself, before you prepare your speech. A single mistake in this speech might show that you have no knowledge about the topic. Persuasive speeches demand a lot of research and extensive information. Make sure you well researched, have acquired all the information, and have studied what you have with you, thoroughly. Best of Luck! 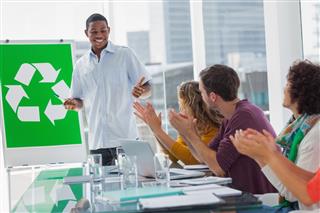 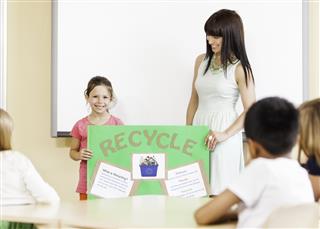