This is the Customary Etiquette to Follow in Military Funerals

Observing the correct etiquette and decorum at a funeral is important and it is even more so for a military funeral. Here's more on what rules are to be observed during such a somber occasion. 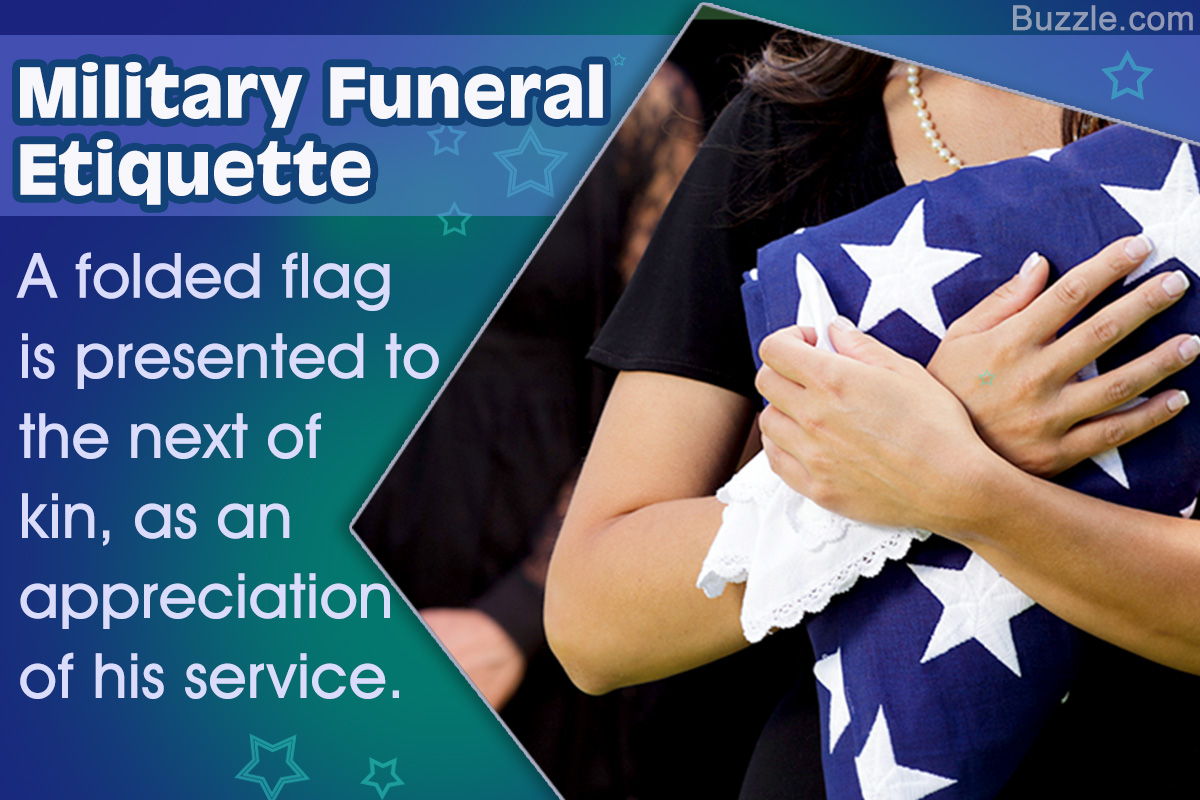 Observing the correct etiquette and decorum at a funeral is important and it is even more so for a military funeral. Here’s more on what rules are to be observed during such a somber occasion.

The funeral service of a former member of the Armed Forces is a serious occasion, requiring the highest levels of respect and somberness. Proper decorum and rules are to be followed at such a ceremony. In this article, learn the correct military funeral etiquette, which should be followed during a military funeral ceremony.

Steps of a Military Funeral

An honor guard detail is provided for the duration of the burial ceremony. At least 2 members of the Armed Forces are present and they perform the necessary military procedures. Based on the military rank of the officer, the number of Honor Guards is decided. One member of such a military detail is from the armed service in which the deceased soldier served. A military chaplain is expected to preside over the ceremony and perform the service.

With the conclusion of the gun salute, the flag folding ceremony begins. The folding is performed by the Honor Guard detail, each fold of the flag has a symbolic meaning. Once folded, the flag is presented to the next of kin, as a token or gesture of appreciation for the service rendered by the fallen soldier. The bugle anthem “Taps” is played by a lone bugler or a recording is used. After presenting the flag, the ceremony is over and a lone soldier watches and salutes the casket as it is lowered into the ground.

Dress as you would for a funeral, somberly and discreet. Do not wear casual clothes like denims or T-shirts. Knee-length skirts are allowed. Black is the color for the occasion. Avoid baseball caps and similarly casual headgear. Women can wear formal and elaborate hats. On the whole, a guest’s attire at a funeral, should be muted and with respect to the severity of the occasion, be respectfully dignified. Wear comfortable shoes and be at ease in your attire, as fidgeting during the service is severely frowned upon. Also, military funerals are longer in duration as opposed to a regular funeral service, so dress comfortably.

For members of the Armed forces, both current and formal, military funeral attire will be complete dress uniform. Such guests should salute in the following situations:

Civilians should not salute but instead must remove any headgear immediately and place it over the heart. In the absence of headgear, the customary gesture is to place the right hand over the heart. This is a sign of respect to the fallen soldier.

In some military funerals, there is no seating provided. If there are seating arrangements, then the soldier’s immediate family should be given preference and be seated at the front. Unless permitted by the chaplain, do not sit down during the ceremony. The next of kin should be seated at the front of the seating arrangement as he/she will be given the folded American flag after the flag folding honor is carried out. The Honor Guard Detail and the chaplain are two members, whose conduct and behavior must be followed throughout the ceremony.

Turn off cell phones and any other electronic devices. Children should be keep quiet and must behave themselves for the duration of the ceremony. If possible, leave young children like toddlers and infants at home for such a ceremony. The long duration and seriousness of the situation as well as the gun salute can make them edgy and they may create a disturbance. Observing the correct military funeral manners is necessary. Do not talk loudly. If you need to address someone, do so quietly. Your demeanor and attitude should be serious. Family members may require quiet consolation, be there for them silently.

A military funeral is the last honor and show of respect given to a fallen soldier by his country, his fellow soldiers and his family and friends. Due to the seriousness of the occasion, it is important to follow the proper etiquette to avoid disrespecting the memory of the deceased.