A manuscript speech implies reading a pre-written speech word by word. Go through this SocialMettle write-up to find out its meaning, some examples, along with useful tips on how to present a manuscript speech. 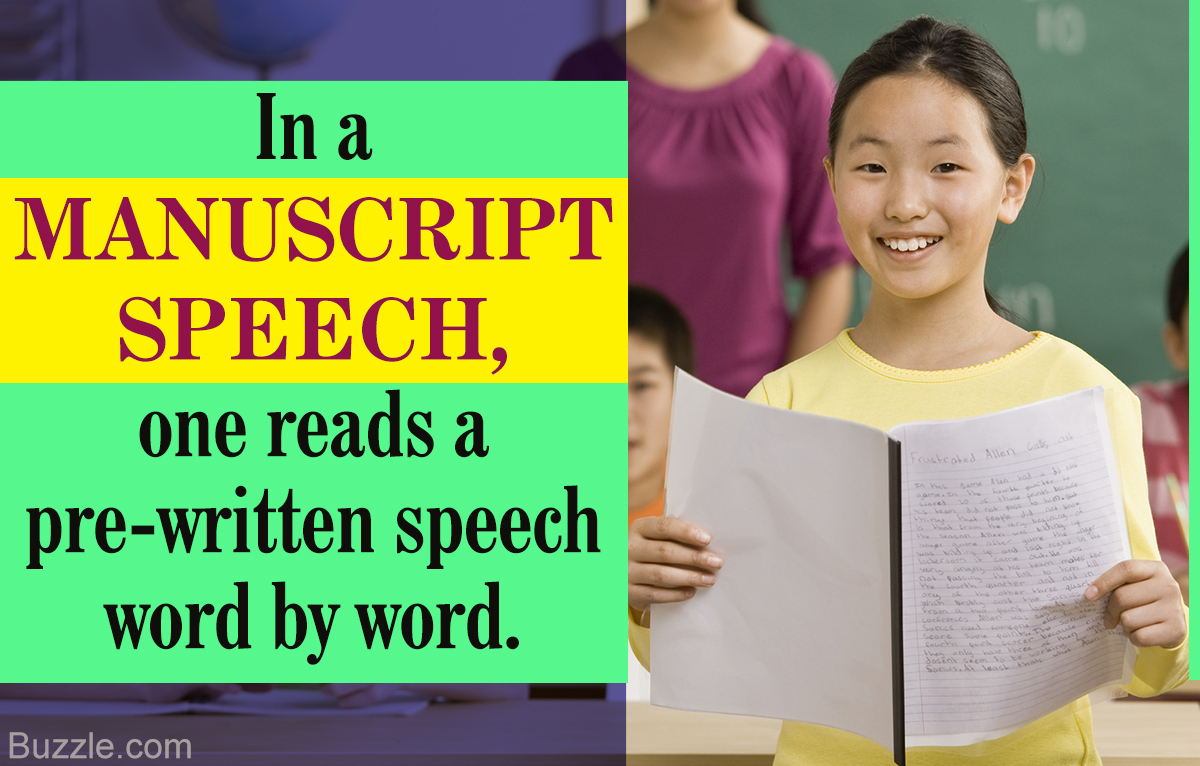 A manuscript speech implies reading a pre-written speech word by word. Go through this SocialMettle write-up to find out its meaning, some examples, along with useful tips on how to present a manuscript speech.

Tip! While preparing the manuscript, consider who your audience is, so as to make it effectual.

Making a speech comes to us as a ‘task’ sometimes. Be it in school, for a meeting, or at a function; unless you are at ease with public speaking, speeches may not be everyone’s cup of tea. A flawless and well-structured delivery is always welcome though. Memories of delivering and listening to a variety of speeches are refreshed when confronted with preparing for one.

Being the most effective way of communication, a speech is also a powerful medium of addressing controversial issues in a peaceful manner. There are four types of speeches: impromptu, extemporaneous, manuscript, and memorized. Each has its purpose, style, and utility. We have definitely heard all of them, but may not be able to easily differentiate between them. Let’s understand what the manuscript type is actually like.

This is when a speaker reads a pre-written speech word by word to an audience.

It is when an already prepared script is read verbatim. The speaker makes the entire speech by referring to the printed document, or as seen on the teleprompter. It is basically an easy method of oral communication.

Manuscript speaking is generally employed during official meetings, conferences, and in instances where the subject matter of the speech needs to be recorded. It is used especially when there is time constraint, and the content of the talk is of prime importance. Conveying precise and succinct messages is the inherent purpose of this speech. Public officials speaking at conferences, and their speech being telecast, is a pertinent example.

There can be various occasions where this style of speech is used. It depends on the context of the address, the purpose of communication, the target audience, and the intended impact of the speech. Even if it is understood to be a verbatim, manuscript speaking requires immense effort on the part of the speaker. Precision in the delivery comes not just with exact reading of the text, but with a complete understanding of the content, and the aim of the talk. We have witnessed this through many examples of eloquence, like the ones listed below.

✔ Precision in the text or the speech helps catch the focus of the audience.

✔ It proves very effective when you have to put forth an important point in less time.

✔ Concise and accurate information is conveyed, especially when talking about contentious issues.

✘ If you are not clear in your speech and cannot read out well, it may not attract any attention of the audience.

✘ As compared to a direct speech, in a manuscript that is read, the natural flow of the speaker is lost. So is the relaxed, enthusiastic, interactive, and expressive tone of the speech lost.

✘ A manuscript speech can become boring if read out plainly, without any effort of non-verbal communication with the audience.

Tips for an Appealing Manuscript Speech

❶ Use a light pastel paper in place of white paper to lessen the glare from lights.

❷ Make sure that the printed or written speech is in a bigger font size than normal, so that you can comfortably see what you are reading, which would naturally keep you calm.

❸ Mark the pauses in your speech with a slash, and highlight the important points.

❹ You can even increase the spacing between words for easier reading (by double or triple spacing the text).

❺ Highlight in bold the first word of a new section or first sentence of a paragraph to help you find the correct line faster.

❻ Don’t try to memorize the text, highlights, or the pauses. Let it come in the flow of things.

❼ Practice reading it out aloud several times, or as many times as you can.

❽ Try keeping a smile on your face while reading.

❾ Keep in mind that a manuscript speech does not mean ‘mere reading out’. Maintaining frequent eye contact with the audience helps involving them into the subject matter.