The Differences Between Ethics and Morality You Never Knew About

While ethics is a philosophy that questions morality, values and subsequent outcome; morality is a developed and adopted 'code of conduct'. The main objective of the latter is to be able to highlight 'right' and 'wrong'.

While ethics is a philosophy that questions morality, values and subsequent outcome; morality is a developed and adopted ‘code of conduct’. The main objective of the latter is to be able to highlight ‘right’ and ‘wrong’. 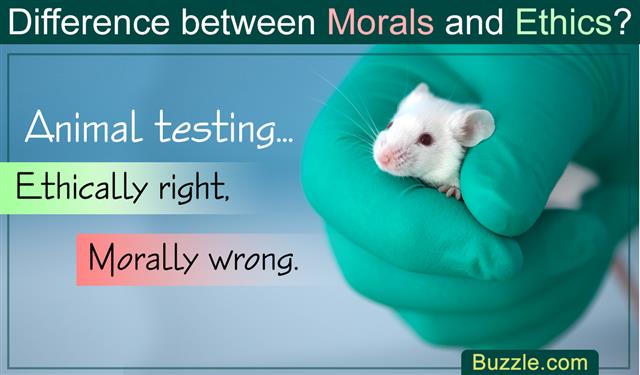 Morality and ethics are two words that seem closely interrelated and it is commonly observed that people incorrectly substitute them for each other. A common incidence where the two terms are thrown around is the business world or a business scenario. At the workplace a company may adopt certain practices which are ethical but can seem immoral to its employees. A certain company advocating or aggressively marketing its product that may not be exactly helpful for its customers. To understand the difference between the two terms in a better way it would be imperative that we first tried to understand what the two words mean and their basic interpretations.

Ethics relates to the philosophy behind a moral outcome. In order to spotlight acceptable and unacceptable behavior within a specific situation, ethical behavior is defined. The term ‘ethics’ also refers to understanding and adopting moral values within the home or workplace that should be defined.

It relates to values commonly adhered to and fundamentals or meta-ethics in the immediate surroundings. There are different types of ethics and the application of each differs from one situation to another. In the case of normative ethics, the notion behind what declares an action as ‘right’ or ‘wrong’ is derived and defined. In meta-ethics, judgmental properties within a situation are investigated. Issues relating to the sensitivity of ontology, semantics and epistemology are explored in this stream of ethics.

Descriptive ethics examines a situation as a choice made in the presence of the moral agents relevant. Here issues like preferred concepts of etiquette and aesthetics are considered. Relational ethics relate to personal interactions and responsibilities. Applied ethics on the other hand, investigates the success or failure of the application of ethical theory to everyday situations. Ethics are an integral part of social laws and politics. In any dichotomy situation, one where two choices are available, ethics steps in to identify the best action-choice. Ethical action is defined and questioned within our interactions with the terminally sick, animals aged citizens and in issues such as abortion.

Morality refers to an adopted code of conduct within an environment and a set of agreed upon rules for what is ‘right’ and ‘wrong’. Morals have formed the spine of modern society, religion and every individual’s conscience. The conceptions changed in time and take on a new meaning. For example, ‘murder is immoral’, but ‘on the battlefield murder is permissible’. In a way,morality is in sync with ethics. While one is abstract in understanding, the other is defined and in the form of written code.

Morality addresses the ethical queries on the moral outcome of a specific situation. The code of conduct formulated probes prohibitions, controversial behavior, standards of belief systems and social conformity of morally ‘right’ behavior.

Moral codes define ‘appropriate’ and ‘expected’ activity. Community morality is usually defined via commentaries and codes of authority. Morality is better understood as an assimilation of beliefs about the essentials to lead a ‘good’ life. It is not to be confused with religious or fanatic or political perception. Moral codes are based on value systems that have been tried and tested. The best examples of moral codes include the Eightfold Path of Buddhism and the Ten commandments. It is believed that all of us, throughout our lives, act from a developing moral core.

Difference between Ethics and Morality

While morals define our character, ethics dictate the working of a social system. Ethics point towards the application of morality. In the wake of this understanding, national, social and workplace ethics are based on the abstract moral codes adopted and adhered to by each member of the group. Ethics lay down a set of codes that people must follow. Ethics are relative to peers, profession, community, society and nation. Morals are and are dependent on an individuals choice or beliefs or religion and can mean doing the right or wrong thing. An example to help you understand the difference would be: Abortion is legal and therefore medically ethical, while many people find it personally immoral. Ethics can be relatively simple to follow, while applying morals can be decidedly tougher. There can be a moral dilemma, but not an ethical one. While good morals represent correct and upright conduct, ethics act more as guidelines. Ethics are applicable or adhered to by a group or community or society, whereas morals relate to individuals.

As we can see from the above discussion that ethics and morals may seem similar, but are in fact rather distinct. While morals constitute a basic human marker of right behavior and conduct, ethics are more like a set of guidelines that define acceptable behavior and practices for a certain group of individuals or society.