How to Cleverly Handle Overconfident or Annoying People

Confidence is an essential trait for a human being. It helps people rationalize their thoughts and take right decisions. But what happens when a person has too much of confidence? The results are mostly ruinous. What can be done to handle such people and avoid problems? Let's find out.

Home / General / How to Cleverly Handle Overconfident or Annoying People 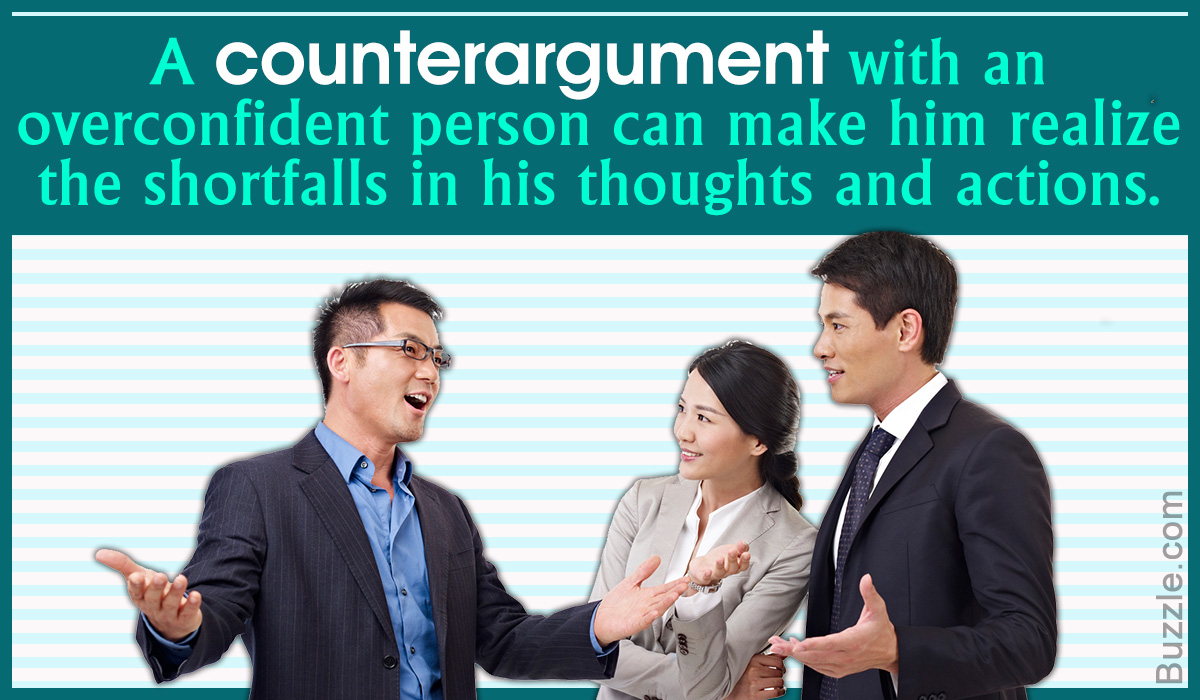 Confidence is an essential trait for a human being. It helps people rationalize their thoughts and take right decisions. But what happens when a person has too much of confidence? The results are mostly ruinous. What can be done to handle such people and avoid problems? Let’s find out.

We can find many people around us who appear so confident in their thoughts and actions that others tend to doubt their own judgment, looking at the confidence of that person. Many a time, decisions taken by such people deliver disastrous results. This happens because they are too confident of what they believe in. Such people fall under the category of overconfident people. Now you may wonder what makes overconfidence different from confidence. Overconfidence leaves a person with no anxiety due to which he fails to analyze the pros and cons of his decision and feels what he thinks, is right. Improper analysis of the negative outcomes often lands him in problems. Confidence, on the other hand, maintains the required amount of anxiety in a person. This anxiety forces him to think of all the possible outcomes of his decision which ultimately, lands him on the right path.

Overconfident people are often annoying and difficult people to be around with. They fail to acknowledge other’s point of view and consider their thoughts and actions as best. Overconfident people at work, try to be the center of attention and try to convince people to agree to their decisions. Apart from work environment, these people tend to interfere in others’ matters and take decisions on their part which may go wrong.

People tend to become overconfident of their decisions because they fail to see that is not visible. They narrow down their vision and do not think about what else can happen if their decisions go wrong. This makes them think that their decisions are right and will bring fruitful results.

Another reason for overconfidence is anchoring bias in which, a person tends to make up his mind on a particular thought or idea and is not willing to shift his thoughts away from it. This nature forces him to consider it as the right option and makes him overconfident on that issue.

Overconfidence is also a result of confirmation bias. The person is inclined towards a particular perspective and wants others to support him for that, without giving much thought to the perspective that might be the right one.

People become overconfident by believing in the predictions for certain issues. They think what has occurred before will definitely happen once again and do not consider the uncertainty associated with it, which may land them into trouble.

How to Deal with Overconfident People?

I will be telling you some ways to cope with overconfident individuals, and while doing so, it is necessary that you keep your calm and patience, when putting your point across.

Difficult people with overconfidence are associated with overconfidence bias. A person with over-inflated belief strongly feels that he has expertise in a certain skill. This often lands him up in trouble. An example of such an individual would be a person considering himself as an ‘expert Futures trader’. Overconfidence on his prediction leads him to investing huge amounts of money in the stock market, which ultimately makes him suffer heavy losses.

A person lacking confidence has lots of doubts. He is not convinced by his known decisions and this makes him suffer from extreme anxiety and low self-esteem. It is therefore necessary for a person to build self-confidence that is at optimum level so that he can take right decisions. However, it is equally important to keep a check on the confidence level so that it doesn’t become a little too much to turn into overconfidence.