What Does Your Walk Reveal About Your Personality? Find Out Here

Body language experts believe that a person gives off various non-verbal cues about his personality, intentionally or unintentionally, through his facial expressions, gestures, gait, etc. They believe that a person's walking style may say a lot more about his personality than he may think. Can your gait reveal the kind of person you are? Let's find out.

Home / Friendship / What Does Your Walk Reveal About Your Personality? Find Out Here 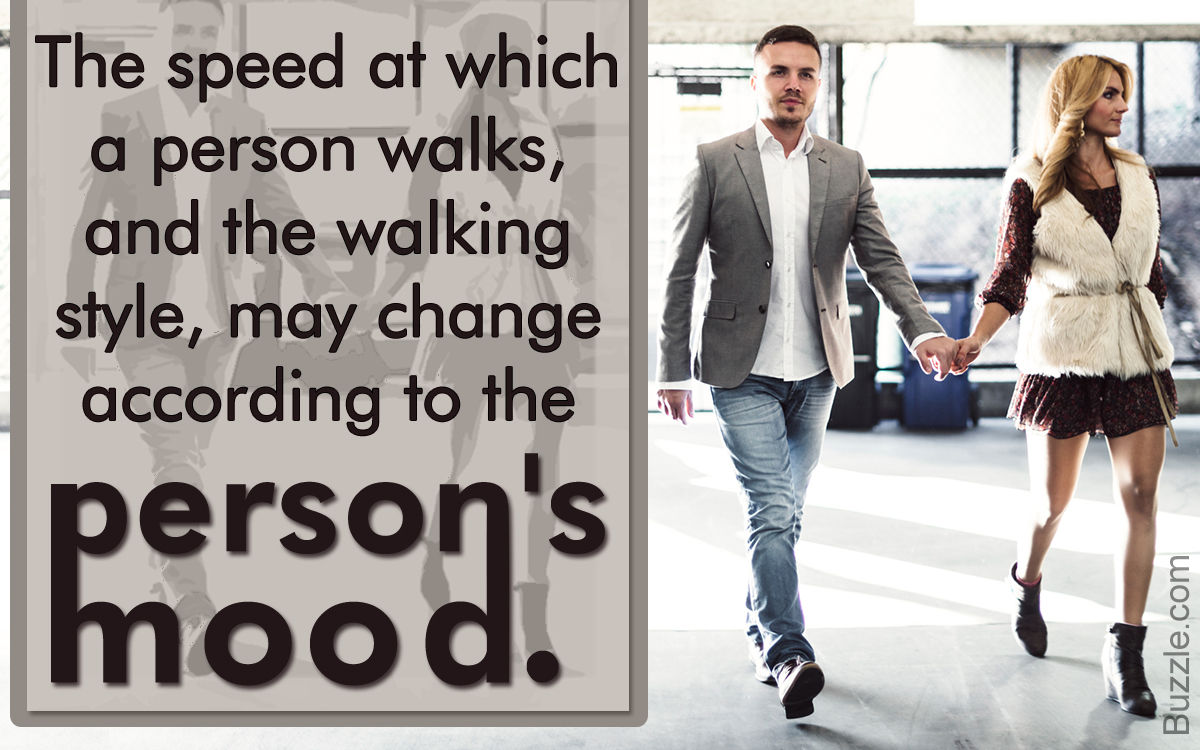 Body language experts believe that a person gives off various non-verbal cues about his personality, intentionally or unintentionally, through his facial expressions, gestures, gait, etc. They believe that a person’s walking style may say a lot more about his personality than he may think. Can your gait reveal the kind of person you are? Let’s find out.

Don’t judge a book by its cover. Well, body language experts certainly won’t nod their heads in approval when you utter these words. Though there are many who consider body language to be an inexact science, or a pseudoscience, volumes have been written on the subject, with several studies to back their analysis. There is one thing though, your body language does reveal a lot about your mood.

Think of a child’s first day at school. No matter how many times his parents tell him to put on a happy face, all he does is drag his tiny feet, and look back at them with puppy eyes to coax them into taking him back. Now remember the happy, bouncy walk that every child has, each time he goes out to play.

While the posture, the speed at which a person walks, and the walking style may sometimes change according to a person’s mood, all of us do have a modal, distinctive gait that could influence how others perceive us.

Can You Walk the Walk?

Experts believe that the way a person talks, walks, and conducts himself, certainly reflects a lot about his mood, attitude, and personality. Let’s have a look at the arguments they give in favor of body language.

Are Your Feet Telling Your Story?

There’s a fat chance of a sportsman walking with a spring in his step after losing to his opponent, whereas a person is likely to walk confidently with his head held high after any accomplishment. In some cases, body language does seem to be universal.

Being a learned behavior that is set early in life, our gait, or the way we walk, is harder to control. In a study conducted by American psychologists Paul Ekman and W.V. Friesen, people were made to see videotaped recordings of individuals who were lying. They could judge if a person was lying or telling the truth when the recordings showed the lower part of the body. While the people who were lying paid attention to their facial expressions and hand gestures, it was the muscle movements in the legs and feet that got them caught. So, better watch out, ‘coz legs don’t lie!

Though an individual’s gait could reveal a lot about his mood or personality, body language experts stress on the need to analyze corresponding hand gestures, micro-expressions, gaze, head movements, etc.

All of us have come across high-strung people, who take long strides, and swing their arms enthusiastically as they walk. When we spot a person with this kind of walk from a distance, we instantly think that this is an energetic person who has some place to be. Such a person exudes confidence, and seems to have everything under control.

It is widely believed that people who have a spring in their step, and walk with their head held high and shoulders back, often have a positive approach to life. The exaggerated swinging of arms also gives an impression of a person who is full of energy. People with a positive self-image move around with ease. Individuals who look up while walking are driven and ready to face problems head-on.

You would have also come across people who have a brisk, forceful gait, and don’t like stopping anywhere once they are aware of their destination. These are the go-getters. More often than not, these people are an asset to any organization, as they value time. However, don’t jump to any conclusions. There are other gestures that must be considered.

At times, people may even walk fast to turn attention away from themselves. A person who walks fast, but mostly looks at the ground while walking, may lack self-esteem. It is the drooping head, downward gaze, or the slumped shoulders that differentiates these people from the go-getters.

Then there are people who appear to be lethargic or sloppy, due to their habit of dragging their feet. Well, this is certainly not the best way to get attention. We all find it extremely annoying. You can forget about making a good first impression. It is double-trouble if such a person is a slow walker, as the noise, then, does not subside anytime soon. Some people walk so slowly that they make the process of walking seem to be a Herculean task, giving an impression that every step they take is draining them off their energy.

Unless the individual is unwell, or actually has low energy levels, such a slow, shuffling gait may indicate feelings of inadequacy. This kind of gait may indicate a person who is insecure or frightened of what may be lying ahead.

The World is My Ramp

Yes, these could be wannabe models, or simply those who wish to hog all the attention. They have a burning desire to stand out in a crowd. Women with this gait take long, exaggerated strides, with one foot moving in front of the other, along with the seductive swinging of the hips. There’s nothing wrong with being fashionable, but if you are out there to get noticed, be ready to handle the wrong kind of attention as well.

You would also have come across men who are out there to impress women with their macho walk. They are hard to miss, as they swagger along, walking as if they own any path they tread.

While some people walk so fast that it feels the world is about to end, there are those who walk so slow that they irritate the hell out of people who walk at a normal pace, leave alone the fast walkers. People who always walk at a slow pace and take small steps are cautious people, and are less likely to be risk-takers.

Those who walk at a leisurely pace, and always walk as if they are taking a stroll, are likely to be people who are calm, relaxed, or complacent. If you are in a mood to judge passersby, then don’t forget other elements of body language as well.

Walking with folded arms may actually be a sign of anxiety, fear, or insecurity. Walking with hands in the pockets and downcast eyes may mean that the person is not completely open to the environment, and may not be willing to communicate. The partial arm cross, wherein the person swings one of the arms across the body to hold or touch the other arm to form a barrier, also shows disinterest, detachment, or insecurity.

Unless a person is on the heavier side, putting a lot of pressure on the ground while walking could indicate an individual who is persistent. On the flip side, such individuals could be set in their ways. They may be rigid or inflexible.

When two people have synchronized body language, it reveals that they are comfortable with each other. However, the placement of the feet changes if others invade our personal space. For instance, a person’s feet may point away and he or she may cross the arms, when he is not comfortable with another person. When a confident person walks towards a friend or a person he likes, he is likely to make eye contact, and move his body towards that person. This indicates that he is showing interest in that person.

Even if we show disbelief in the accuracy of body language, the habit of passing judgment is a part of human nature. We judge people by observing their facial expressions, gait, hand gestures, etc., all the time. There are several subtle or not-so-subtle signals that we give off unconsciously, and a lot more could be revealed through the body language, than we may think. However, a single gesture, like the walking style, cannot be viewed in isolation. Interpretation of body language entails an analysis of clusters of movements that involve head movement, micro-expressions, hand gestures, gait, posture, etc. Unless you have done an in-depth study of body language, there’s a high probability of misinterpretation. Moreover, the mysteries of the human psyche are not that simple to unravel, and it is certainly not everybody’s cup of tea.