Key Differences and Similarities Between French and American Culture

Through this article, we will look into the good deal of differences and a little bit of similarities that exist between the United States and France. Here's the summary of observations on the American and French culture. 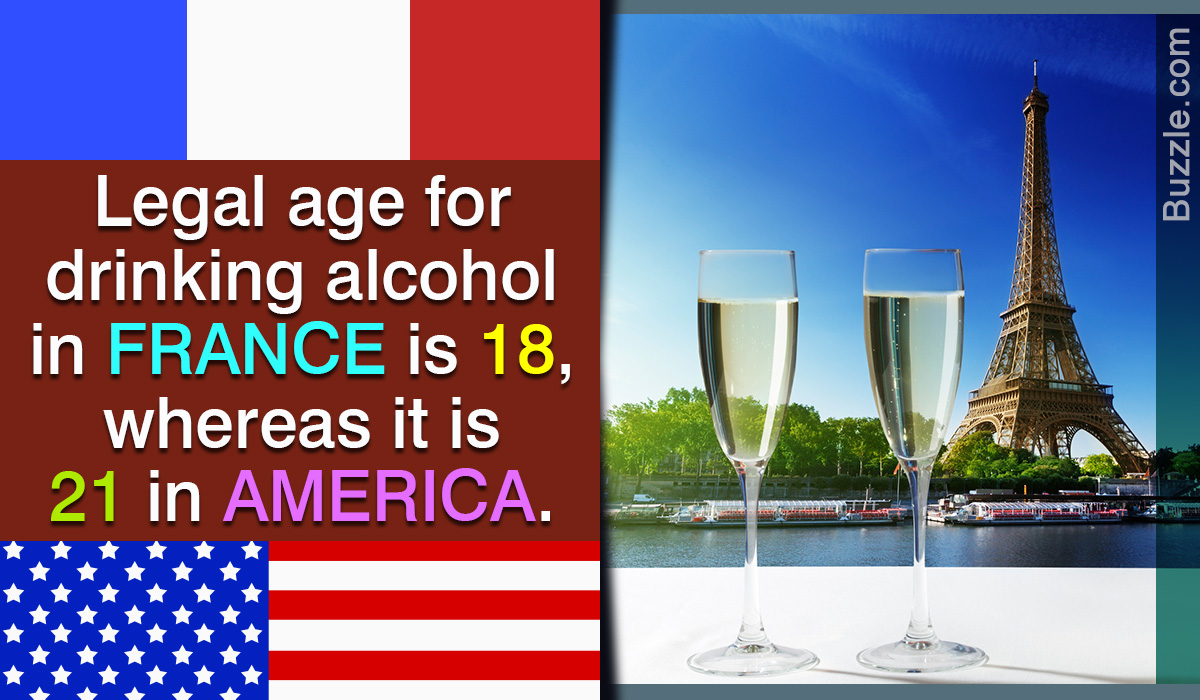 Through this article, we will look into the good deal of differences and a little bit of similarities that exist between the United States and France. Here’s the summary of observations on the American and French culture.

“You have to taste a culture to understand it.”
―Deborah Cater

Every country is associated with some or the other culture, this culture is the very root of an individual’s existence. In fact, a few countries even encompass different cultures according to the states and language. Take for example India – it’s a rich melange of various cultures and beliefs.

Culture defines one’s way of living – it is like a guidebook which everybody gets accustomed to in order to simplify daily living. It adverts to the attitudes, practices shared by a group or a society. It defines a country’s language, architecture, clothing, cuisine, religion, and their customs.

Although they live only a stone’s throw away crossing the Atlantic ocean, France and America are like night and day. Though they worked as Allies in the past, they are fascinated as well as repelled at the thought of each other. They always had a troubled relationship, but when it comes to matters of military and strategic cooperation, they are best friends. However, when we come down to culture and social attitude, they are poles apart. The upcoming sections will uncover the differences and similarities between these two cultures.

◼ The moment you visit France you are surrounded by its rich history, battles fought and won, you get a clear-cut picture about it by just gazing at their massive and beautiful buildings and museums. This long history permeates the culture in French people.

◼ In contrast, America is relatively new and is gradually embracing the idea of change – be it cultural change, government change, etc.

◼ France is famous as the birthplace of many renowned artists in the world, they have a strong inclination towards arts. So they leave no stone unturned when it comes to appreciating it or promoting its various forms such as dancers, painters, poets, and, musicians. French Ministry of Culture invests somewhere around 10 billion dollars every year to encourage its art.

◼ Americans are not that tended towards art, they perceive it just as a hobby and some who are really passionate about it make it their career. More than $146 million dollars are spent by the America’s National Endowment for the Arts.

◼ French are often perceived as rude and arrogant. This is due to the fact that they don’t smile at every stranger they pass by. They are more formal in nature, especially if they are meeting somebody for the first time. Kiss on the cheek is fairly common if that individual is particularly close.

◼ Americans smile and greet anybody they come across. You won’t be surprised when they smile at you if you are standing at the subway platform. Sometimes, they tend to meet somebody with a hug.

◼ Talk about France and how can you skip wine? Wine is simply a daily part of a French person’s meal. Let it be day time or evening, you will find almost everybody sipping on their favorite bottle of wine. While the age limit of consuming alcohol in France is 18, you won’t find kids drinking with their parents.

◼ The legal age in the US is 21 years. Before that if they find you drinking you can be arrested or treated as the law prevailing to that state says.

◼ French culture is all about standing united against their enemy, well in this case against any problem or work-related task. They are of the belief that you can accomplish more if you work together as a group as everybody is equally important.

◼ Individualistic goal, individualistic success is the mantra followed by all Americans. They follow this religiously to get their work done. You are responsible for your own growth, and it tends to believe in the strength of an individual to make an impact in the world.

◼ Talk about Paris and dare you forget about the fabulous fashion week. French people and fashion are magnets, both attract each other. That is why you will never find a French women dressed in a sweat shirt and baggy jeans ever, even if it’s a walk down to the pharmacy. They take their clothes very seriously and consider sweat shirt to be a faux pas.

◼ Americans, on the other hand are extreme when it comes to fashion. They believe in dressing up very casually when they are going shopping, going to college, running errands. However, if the occasion calls for a formal attire, they will dress up very formally. Unlike the French who are all about colors, they are all about sneakers, loose clothing. But they are quite enjoying whatever fashion sense French is passing down to them.

◼ French students are handled in a strict and rigid manner. French pupils are expected to be excellent in writing, punctuation, and spelling. Rote memorization is very important because the professors expect their student to recite whatever they learned during their lectures. Children start going to the school by the age of six. Extra curricular activities are not supported in many schools, but philosophy as a subject was made compulsory in the last year of school. Student and professor have more of a formal relationship, they avoid personal chats and are supposed to address their professors with a title and their last name.

◼ American schools promote interactive learning, they want students to involve more and more in the class. They welcome any suggestions put forward by the students. The age for schooling varies between five to six years. Students in the U.S. can sit for many exams throughout their schooling period including the SATs. Unlike the French universities wherein a student can study in another European country for free, less number of American schools participate in foreign study.

◼ French people give lot of importance to families. They don’t mind pin-pointing a child’s mistake, even if the child is not their son or related to them. Seldom you will find a French mother or a father screaming at their kids to discipline them. They change their tone to make it very clear who’s in charge. They are not aware of the term helicopter parenting, they let the kids fend for themselves.

◼ While Americans do hover over their children’s life, but that is due to motherly or fatherly concern. They are a close-knit group and are always present when any family member goes through a rough time. But elderly parents don’t stay with their families, they stay at old-age homes. Americans are good when it comes to having empathy, teaching friendliness, being engaged in their child’s school activities.

◼ Baby food? What is that? Certain French families don’t believe in spending money buying baby food for their kids. They feed their children whatever they eat, except for really small babies. Mealtime is very important for them, they don’t sit in front of the TV, rather they feel mealtime is bonding time. That is the reason lunch breaks are usually one hour long, they eat breakfast like kings, not too heavy lunch, and, dinner like slaves.

◼ Very few families follow the rule of eating together with their families. Mealtimes are usually spent sitting in front of the TV. In fact people in office shove a hamburger at their desk, because they are too busy working. They don’t mind feeding themselves burgers, fries, coke for lunch or dinner.

◼ When French people meet up, they like to indulge in topics such as political issues of the region and the world in general. In casual meetings too, it’s possible to see two people get into an intense discussion whilst staying detached from the cause. French individuals are highly involved in political activities of their country, an estimate claims that 80% people turned up when it came to Presidential election. They are also taught to question things which are irrelevant and to change laws if they disagree to it.

◼ Americans, on the other hand find it weird and uncomfortable to discuss intensely on current affairs, especially in social encounters. They prefer to keep the discussion light and happy. When it comes to debate, they tend to emotionally attach themselves to the cause they are often supporting, which is perceived as naive by the French individuals. Americans have a laid-back attitude when it comes to political activity. Hardly 50% of the population took part in President’s election vote.

◼ The French people do not work to keep their businesses intact or to serve their customers. They consider their consumers to be their equal and do not acknowledge them as their superior.

◼ In the U.S., demanding better service or having a discussion about the quality of service is considered acceptable. They live by the belief – customer is king.

◼ Whenever anybody is invited for dinner, the guests usually make sure to get a gift for the hostess. Going empty hand to somebody’s house is considered to be very rude.

◼ Likewise, in American culture too buying a gift for the hostess is necessary. A gift like a nice bottle of wine, flowers, or a memorabilia from their country seems appropriate.