Who are Extroverts and What are Their Notable Personality Traits?

Some people have an outgoing personality... they simply love to socialize. It's highly unlikely that you don't know a person who fits this mold, because they are out there in thousands -- we call them 'extroverts'. In this article, we will shed light on an extrovert personality, with reference to the characteristic traits associated with this personality type.

Home / Friendship / Who are Extroverts and What are Their Notable Personality Traits? 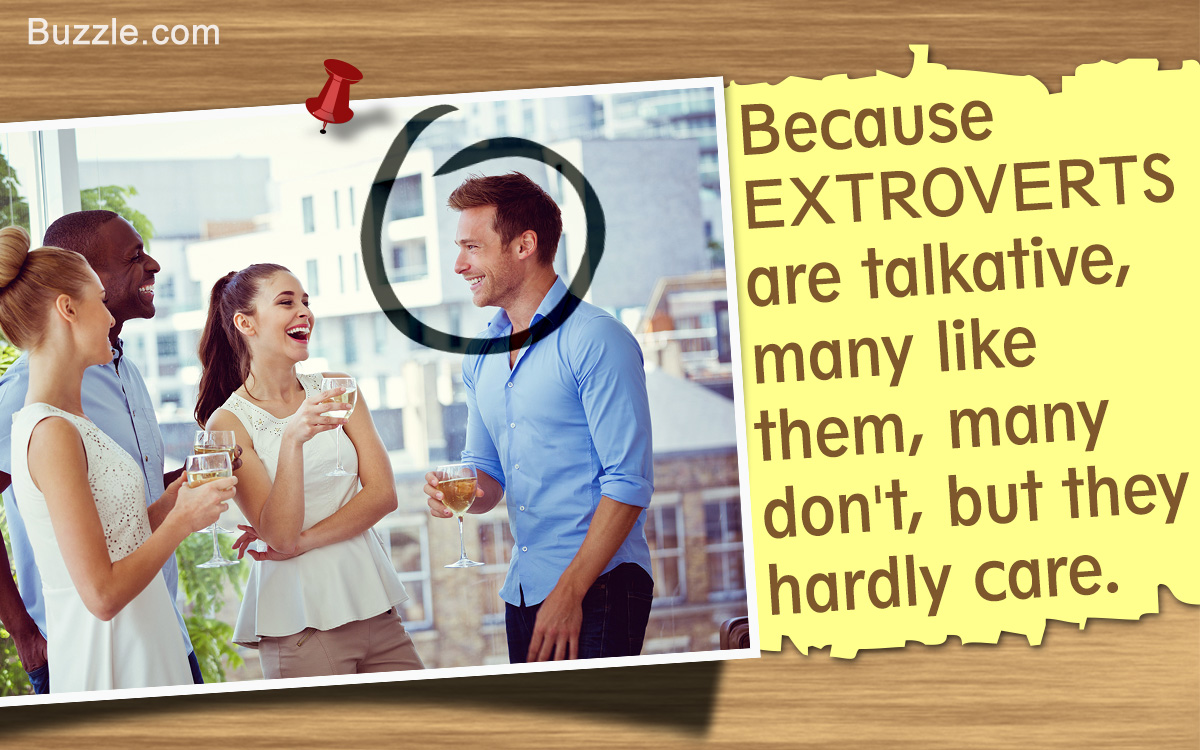 Some people have an outgoing personality… they simply love to socialize. It’s highly unlikely that you don’t know a person who fits this mold, because they are out there in thousands — we call them ‘extroverts’. In this article, we will shed light on an extrovert personality, with reference to the characteristic traits associated with this personality type.

While the term ‘extrovert’ is informally — and that too very often — used to refer to a person with the ability to socialize with ease, its technical definition is not restricted to that. Renowned Swiss psychiatrist, Carl Jung defined extroversion (or extraversion) as the ability of turning the interests and energies of one’s mind toward events, people, and things in the surroundings. In psychology, the term refers to a person who is more concerned about the practical realities of life, instead of being restricted to one’s inner thoughts and feelings.

If you come across a person who loves to socialize, who is talkative, and doesn’t give in to inhibitions, then he is more or less likely to be an extrovert. Extroversion is not just about socializing as it is widely believed. It is also about interacting with people around, i.e., sharing your ideas with them and being open to their ideas. Extroverts often come across as friendly people (overtly friendly at times), approachable, and always willing to help you. Unlike introverts, who are mostly in their past, or future, extroverts prefer to live in present.

The degree of extroversion does matter, and it differs from one person to other… one extrovert to other to be precise. Some individuals don’t take time to socialize; with their gift of the gab they can easily befriend people. You seldom find them alone even in completely new environment. They will strike a conversation with the fellow passenger in the flight with an unbelievable ease. Some individuals, on the other hand, take time to settle, and open up only when they are comfortable; that may take some time.

Unlike introverts, extroverts seldom resort to inhibitions and that, in turn, forms the base of their self-confident personality. They are very enthusiastic — even overenthusiastic at times — and are always a game for any kind of social gathering. Extroverts are, in fact, much more comfortable in large social gatherings as opposed to the confinement of their room.

Extroverts constantly need people around them; loneliness tends to make them restless. Then again, having people around doesn’t necessarily mean partying. It may also mean business meetings, functions, community events, and even public spaces. Self confident, outgoing, enthusiastic, and gregarious… with such personality traits it isn’t surprising that extroverts constantly seek the company of others. After all they are the center of attention wherever they go.

Their outgoing nature works in their favor, as they make the most of the opportunities coming their way without worrying about things like ‘what if’ and ‘but then’. Having said that, their tendency to say whatever they feel can offend people at times. If you are dealing with an extrovert, you need to take that in your stride as it happens to be their basic nature.

Extroverts are well-versed with the art of making new friends. Their excellent communication skills help them get along with the people around quite easily. They don’t take time to assimilate in a new group, which explains why it is rare to find an extrovert alone. Being gregarious and expressive, extroverts are known to be adept in romantic relationships; especially the initiation part. On the flip side, however, they also find it very easy to end (unwanted) relationships.

With their exceptional communication skills, extroverts express their feelings — good, or bad — readily. Whether it is conveying one’s inner feelings to someone, or initiating conversation with a complete stranger, it is usually a cakewalk for extroverts. They are very impulsive in nature, but then they are also known to be a little moody. They will start a new task impulsively, only to discontinue it abruptly the very next day. Being expressive, they make it obvious when they are not in good mood, and that reflects on their work as well.

Extroverts most often make it to those jobs which require interaction with people; a job in sales would be an apt example of the same. With their exceptional communication skills, these people are also considered team players — a definite edge in today’s corporate world, and are often seen occupying leadership positions in various companies.

Extroverts are often deemed practical, realistic, and self-confident, but then, it’s difficult to draw a line as an individual may display these traits only when he is with his immediate family and close friends, and instead be totally opposite when interacting with his colleagues, or acquaintances. For instance, they would readily go on an outing with family members, or close friends, but hesitate to go out with his colleagues. It is this mixture of traits which some sources integrate to make a third personality type — the ambiverts, i.e., those who are neither overtly extrovert, nor overtly introverts.

Ambiverts: On the 1-to-7 introversion-extroversion scale devised by professor Adam Grant of the University of Pennsylvania’s Wharton School of Management, introverts lie at 1 and 2, extroverts at 6 and 7, while ambiverts are found at 3, 4, and 5. The ambivert in this illustration, for instance, is comfortable with family members and close friends, but not so comfortable with colleagues, or friend’s friends.

Basically, one needs to understand that everybody has both, introvert and extrovert personality traits in them — in varying degrees though, and the side which is dominant forms the individual’s nature. Then again, fluctuation in these traits cannot be ruled out. Even an extreme extrovert can demonstrate the obvious traits of an introvert at times, consciously or subconsciously.

In the western society, people with extrovert personality traits are often regarded superior to their introvert counterparts. Some people even go to the extent of considering extroversion a personality disorder, which is far from true. Extroversion is basically one of the two personality types that you are likely to have — introversion being the other, and both can lead to certain issues in your personal and professional life after a limit.

One can assume that an extrovert would make a good salesperson owing to his exceptional communication skills. But then, his talkative, or blunt nature need not necessarily go down well with the person with whom he is dealing. In such cases, extroversion would be more of a curse, and the person will have to draw a line somewhere.

The belief that extroverts are more happy than introverts is again a myth as both have different sources of happiness. An introvert would derive the same amount of happiness from reading what an extrovert would from partying. Dominance of either traits can have its own benefits and drawbacks, and therefore, it is important to strike the right balance to live a happy life.