What Intellectual Arrogance is Explained With Popular Examples

There's nothing wrong with being very smart. It's when an individual lets his pride in being smart, go to his head, that problems start to occur. Such swollen-headed individuals exhibit a condition known as intellectual arrogance.

Home / Friendship / What Intellectual Arrogance is Explained With Popular Examples 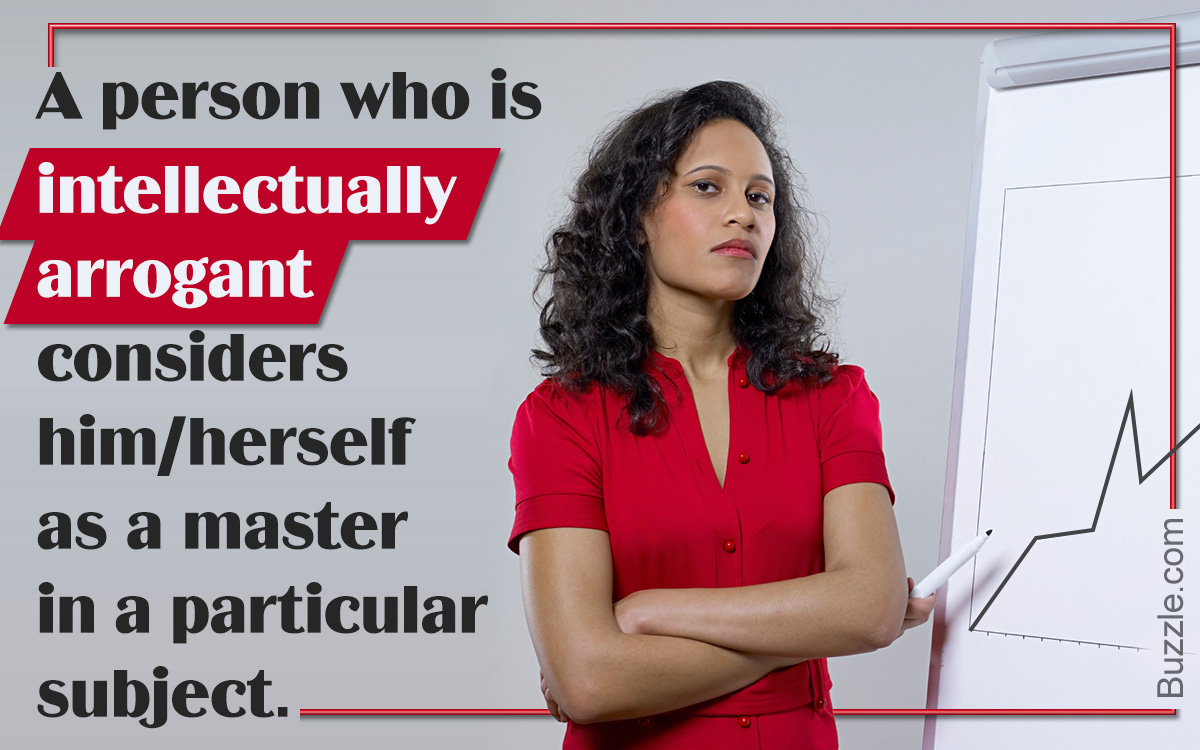 There’s nothing wrong with being very smart. It’s when an individual lets his pride in being smart, go to his head, that problems start to occur. Such swollen-headed individuals exhibit a condition known as intellectual arrogance.

“When they discover the center of the universe, a lot of people will be disappointed to discover they are not it.” – Bernard Bailey

“Wisdom ceases to be wisdom when it becomes too proud to weep, too grave to laugh, and too selfish to seek other than itself.” – Khalil Gibran

Pride or arrogance is considered one of the seven deadly sins and rightly so. It is a proud man who never looks down and hence ends up tripping on a banana peel. It is a proud man who is so busy admiring his face in a mirror that he fails to see events taking place around him. And it is a proud man who ignores warnings and advice and will walk down a road, even after being told it is a dead end. Pride can take many forms and so can intelligence. There are different types of intelligence, which present themselves in different individuals. Take nerds for example. From how the stock market works to how a space shuttle takes flight, nerds or geeks know everything under the sun. Then there are specific intellectuals like wine experts or animal experts, whose knowledge is categorically specific. Some people can exhibit intelligence in bursts and spurts, one minute they are very smart, the next, they are super dumb. And then there’s the intellectually arrogant or arrogant intellectuals, a horrifying combination of intelligence and arrogance.

What Does Intellectual Arrogance Mean?

It’s nice to be smart and clever, to participate in conversations and know the most about a topic or most topics. Being smart is one thing. But being overtly smart, a Mr/Miss know-it-all or smarty-pants is another. Smartness does not mean being a critic and simply pointing out flaws and mistakes in another person’s work and just praising your own work. Smartness does not mean blinding yourself from the truth, just because it differs from your perceived belief or opinion. Above all, you can be smart and be nice about it, like listening to others opinions and respecting them. Here’s where the concept of intellectual arrogance comes in. This term refers to a state and frame of mind, where an individual considers his/her intellect to be superior to others, his/her knowledge cannot be challenged and he/she judges others based on their intellect. The individual may actually not know a lot and in fact, isn’t really intelligent at all. It’s just that the person thinks he/she knows it all and is determined to shove their smartness in your face, every chance they get. Everyone has met or has an intellectually arrogant person in their lives. Key points that define such unique human specimens, are the following:

It seems like there is a fine line between intellectual arrogance and narcissism or self-love. There is actually very little difference. Both types of personalities think too much of themselves and are too proud, just of different things. A narcissist may consider himself the best looking, smartest and easily the greatest person on the Earth. But an arrogant intellectual will hold himself in the highest regard only with regard to his super intellect or intelligence. He may be very normal and regular in other thoughts, with low or moderate self-esteem and a sensible estimation of his looks and popularity. The arrogant part of his personality may come out, only when it is time to express his opinion or knowledge on a subject.

Members of the league of the intellectually arrogant are usually found amongst technical or medical professionals or learned ones of any profession. While not all experts are intellectually arrogant, most seem to have an opinionated view on any subject, especially their own. Yes, they are experts and smart and do know their subject but there’s no need to be smart alecky about it and look down their nose at others. Plus such experts love influencing others’ viewpoints and converting them to their own views (as long as the converts remember who’s the expert).

One of the best examples of a very annoying yet amusing intellectually arrogant individual is Sheldon Cooper from the CBS comedy series The Big Bang Theory. He is a theoretical physicist, Ph.D. holder and works at Caltech but according to Sheldon, he is one of the greatest minds of the 20th century and his work is unrivaled by all except Isaac Newton. Sheldon is so smug and self-confident of his expertise, he often dismisses the work and experiments of his colleagues and friends, Leonard and Rajesh, as being of no use. He is very dismissive and arrogant towards Howard, for only completing his Masters in Engineering and not studying further. Sheldon has an opinion and view for anything and everything under the sun and will not change it for anything. He will challenge authority figures, if he feels they are wrong (of course they are wrong, he is always right) and regards everyone’s intelligence as beneath his own. A similar character is Niles Crane of the sitcom Frasier. Even Barney Stinson of the How I Met Your Mother series, can be thought of being intellectually arrogant, except his area of expertise is limited to wining, dining and impressing the ladies and being the quintessential ladies man.

So what’s the harm in being intellectually arrogant? Well, such individuals soon become highly unpopular and intolerable, with most people coming up with inventive excuses to avoid their company. All it takes to clear a hall or a group, is the arrival of a self-proclaimed expert or know-it-all. Even if they are right or there is some merit to their ideas, no one really pays attention or takes them seriously. The greatest harm in being intellectually arrogant is to oneself. Such an individual closes him/herself off from the world and from understanding other viewpoints and this sort of attitude restricts and limits their own knowledge.